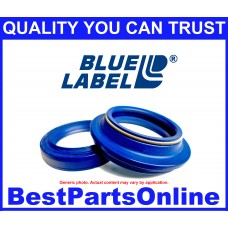 Blue Label® seals are superior because they are made using a high material grade, proprietary

compound. This is obvious because of the seals:

1) Produce and maintain less friction and virtually no stick-slip

4) Are compatible with many OE and aftermarket oils

by up to 78% and reduce stick-slip almost completely.

up to 25% longer in endurance testing.